Joined Aug 25, 2008
·
2,172 Posts
Ian Faloon in his book makes the point that the last 900SS models were the least likely to be uniform, as the factory was in turmoil, on the verge of bankruptcy and any parts that were to hand could be fitted. Some late MHR which used the Mille type running gear, were fitted with square case engines, some kickstart and some electric.
► Show Full Signature
Ducati GT1000, Ducati 900S2 Bevel
A

Joined Feb 22, 2016
·
16 Posts
Interesting. Thanks ,everyone for the input. I'm looking at an '82 900ss with the dual seat, but I received some good advice once to be cautious of aftermarket or incorrect year parts. This is what I'm looking at 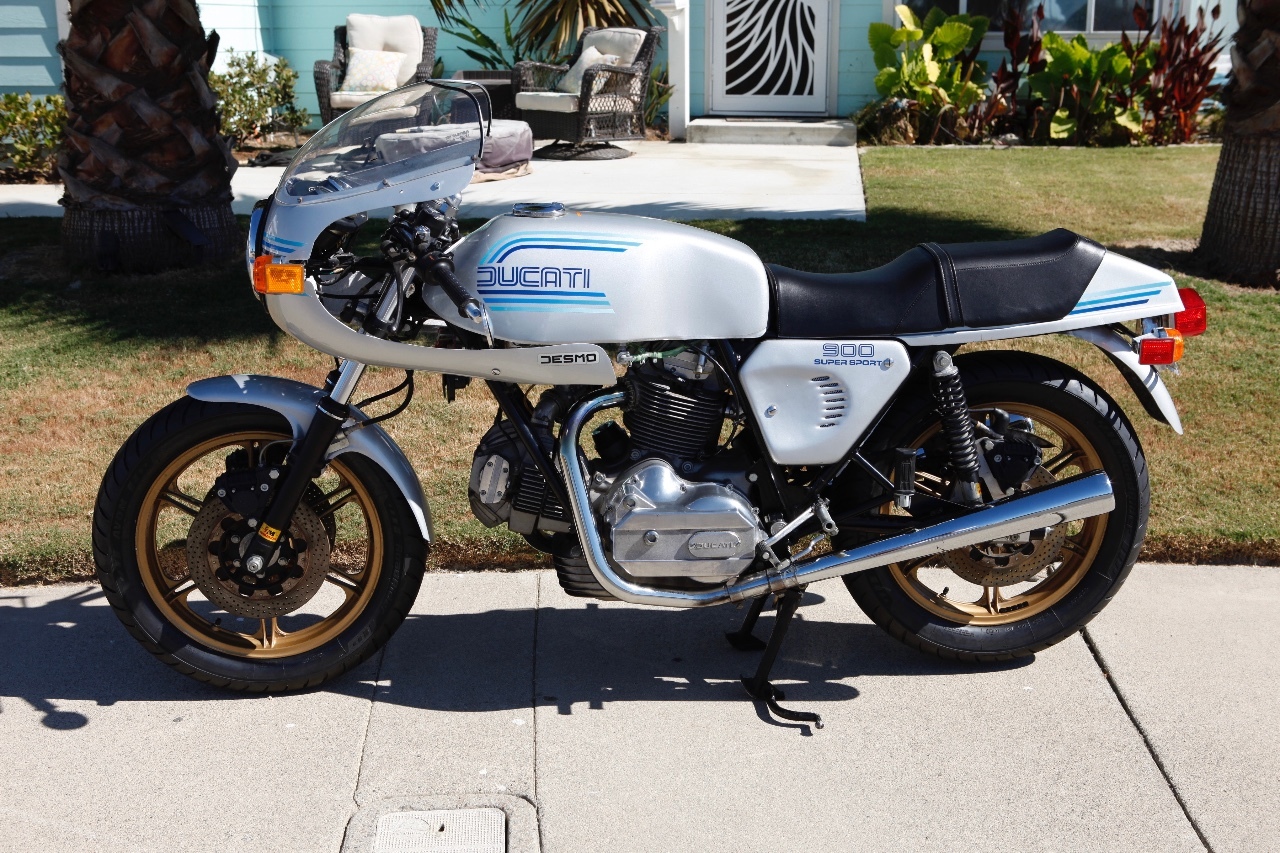 avoca said:
Interesting. Thanks ,everyone for the input. I'm looking at an '82 900ss with the dual seat, but I received some good advice once to be cautious of aftermarket or incorrect year parts. This is what I'm looking at

I dont know if that ad is legitimate or not but that is a very correct unmolested 1982 900SS. According to faloons book 1982 was the lowest production year (335units) for SS bikes with 1975 having fewer 900s but along with the 750's more total units were made. At least one source has listed the 82 as the most sorted and reliable of all bevel SS models but as has been said 1982 was a year that had a bunch of possible variations to what is and isnt correct. The bike in that ad looks to me to be close to 100% correct and original. That is the correct dual seat for 82.

The only problem with the ad is the title that calls it an MH900, it isnt an MH anything. That is a redflag, most owners know what they have so just who is it that is posting the ad? Edit: oh the owner explains why it is listed as an MH so it sounds legit. I think that is a steal for a bike that is only going to go up in value. most of the good quality bevel SS bikes are being priced at around 35 or 40 K theses days.
► Show Full Signature
Vintagedesmo.com

Joined Mar 18, 2012
·
144 Posts
Looks like a great bike. I've no doubt that a big reason why you will see older style seats on the 82s is because the 82 double seat is so ugly. If I bought this bike, the first thing I'd do is put a single, zipper hump seat on it. Good luck avoca.
► Show Full Signature
Rick 81 MHR, 17 Enduro

flynbulldog said:
Here's a good reference for the 82 SS https://www.motorcycleclassics.com/classic-italian-motorcycles/ducati-900ss-zm0z12mazbea
Click to expand...

Odd report. It states that the 82 may have been "the best" but provides no information to support this claim.
► Show Full Signature
Rick 81 MHR, 17 Enduro

rick81mhr900ss said:
Odd report. It states that the 82 may have been "the best" but provides no information to support this claim.
Click to expand...

The article does site some of the updates that have come along over the years but to me the claim feels a little toung-in-cheek, he does say that he has one and is biased. I can understand that.
And yep, mine has an earlier factory single seat on it and I have no intention of changing it back to original even though I've strived to keep the rest of the bike as correct as possible.
► Show Full Signature
Vintagedesmo.com

Joined May 27, 2008
·
61 Posts
I must be the only one who likes the 82 double seat, I got a single seat with mine and changed it back to the double because i like it better (original is better I reckon)
Only obvious thing I see that should be more correct for the model is the early guards on that one I think should have the later squarer type guards (though as some have said, they came with all sorts of mixed parts late in the piece)

avoca said:
Interesting. Thanks ,everyone for the input. I'm looking at an '82 900ss with the dual seat, but I received some good advice once to be cautious of aftermarket or incorrect year parts. This is what I'm looking at

Joined Sep 24, 2006
·
10,414 Posts
Mine has the round fenders and I'm pretty sure they are original to the bike. Yeah I saw that exhaust on the bike in cycle trader and it doesnt look correct. Exhaust is easy enough to correct if you're not hung-up on the numbers stamped on the replacement Contis and could be used as a bargaining point. I did forget to mention it in my earlier post - sorry about that. I 've never seen fairing brkts installed like that but wouldnt put it past a worker at the factory. You'd have to do it to an un-drilled fairing
► Show Full Signature
Vintagedesmo.com

This is not true. I have owned several of these '80 super sports (black and gold) all purchased from original owners, all with solo seats as delivered.
► Show Full Signature
Ciao for now

1980 900 Super Sport. 2859 original miles on this original paint beauty. Everything factory except I changed the Cavis Benz fuel hose out as well as the fuel taps and, I have the airboxes and snorkels in a box.
► Show Full Signature
Ciao for now

Link to all of my bikes and builds: *Click!*
A

Joined Feb 22, 2016
·
16 Posts
Thanks for the posts, guys! So to get this straight, if I were to buy that one bike, I'd want to bring up the possible aftermarket exhaust and the incorrectly mounted fairing brackets?
► Show Full Signature
2008 Sport 1000s
1 - 20 of 29 Posts
Join the discussion
Continue with Facebook
Continue with Google
or sign up with email
Recommended Reading
Read More
Read More
About this Discussion
28 Replies
8 Participants
Last post:
avoca 1 month ago
Ducati.ms - The Ultimate Ducati Forum
A forum community dedicated to all Ducati owners and enthusiasts. Come join the discussion about performance, modifications, troubleshooting, superbike racing, maintenance, and more!
Full Forum Listing
Explore Our Forums
Superbikes Sport Classic Ducati Motorcycle Chat Chit Chat Multistrada
Popular Communities